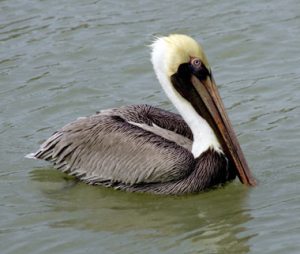 This is member of the pelican family, identifiable by their gray-white feathers and diving hunting habits. It is a fairly large bird, having a wingspan of about 2 to 2.5 meters in length and weighing 6.1 to 12 pounds. Despite its impressive size, it is the smallest pelican species, although it is a larger bird when compared to the average bird size. They travel and hunt in single-file lines, flying low above the water’s surface. They mostly eat fish and amphibians, as well as a few crustacean species.

The brown pelican and all of its subspecies were placed on the Migratory Bird Treaty Act of 1918. Their problems really started in the 1970’s. DDT and other pesticides threatened the health of the species, and their overall population began to decrease, along with other species that were affected. After some time, the state of California, along with several other states, banned the use of DDT. Once the environmental problems really began to set in, the use of DDT was banned all together, and this species, along with many others, have increased. They are currently listed as “Least Concern” by the IUCN.